You are here: Home/Blog/Breed Information/Samoyed Dogs – A Quick & Simple Guide

If you want a type of dog that stays playful in spite of its old age, then consider raising Samoyed dogs. A Samoyed breed is known for its agility and sharp intelligence. Its Siberian origins make Samoyed dogs versatile and alert. Most of these dogs today are usually raised as guard dogs because of its uncanny abilities. But for some dog lovers out there, they just love this breed because of its ever smiling expression.

A Samoyed dog comes from the northern part of Siberia and Russia. Generally, the height of this dog is from 53 to 60 centimeters. A typical Samoyed coat is very straight and thick. Samoyed dogs are relatively small but do not underestimate this small stature because underneath it is a strong and powerful dog. This breed has beautiful almond-shaped eyes that are usually brown or a combination of black and brown. Its ears are always erect. The shape of its furry ears is usually triangular. Even if its undercoat is quite dense, it remains very soft. This think undercoat helps them cope with the cold weather. The tail of Samoyed dogs is curled at the back. The funny thing about a Samoyed breed is that it sometimes covers its nose or face with its tail.

The Samoyed has a compact muscular body that betrays its strength, despite its relatively small size. It has a powerful, wedge-shaped head, black or brown almond-shaped eyes and a strong jaw. The Samoyeds ears, which are perpetually erect, are thick and furry and are triangular in size. Its coat, which has an equally thick yet soft undercoat, is dense. It serves as a layer of protection for cold weather. It is the tail, however, that is the distinguishing feature of the Samoyed breed. The dogs tail is held in a thick and tight curl across the back. There are times when the Samoyed sleeps with its tail over their noses, as this provides additional warmth during extremely cold weather. While there are some Samoyeds that have straight, uncurled tails, this quality prevents them from being included in prestigious dog shows. The Samoyed is sometimes nicknames as The Smiley Dog because it has a perpetually smiling look and is thus, pleasant to look at.

Samoyed dogsare often vulnerable to hip dysplasia, hypothyroidism, and glaucoma. Therefore, you need to make sure that when you purchase this dog, it should come from a very responsible breeder. You also need to ask the breeder about any hereditary diseases that your dog may acquire. If you happen to know the possible diseases, you need to ask help from a veterinarian for care and prevention. 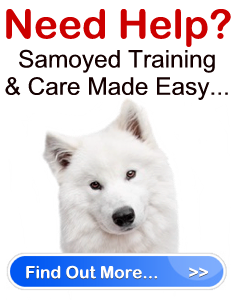